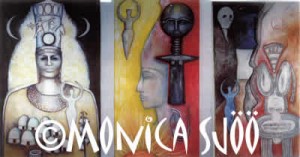 Here is my freestyle/more recent interpretation of the Dea Matris in which the Moon Mother is Diana/Artemis of the Amazons. The Sun Goddess or Solar Mother is African and the Crone dwells inside West Kennet Longbarrow on Wiltshire plain in the south of England. I repeated the image of the predynastic Egyptian Bird Goddess with outstretched arms in each image and for this I used a stencil that I had cut for making graffiti on Bristol pavements and walls, a bit of urban direct action as some of us in our women’s spirituality and politics group attempted to lay a brief spell on the city. We also wrote the words “The Goddess returns, protect the Earth”.

Next: African Goddess of the Paleolithic Caves