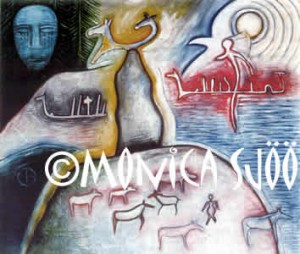 I have stayed at Skogsnas, an eco village started by hippies who, 30 years ago, built their own log cabins and developed arts and crafts and music, many times. It is situated inland in the same county from the city on the Baltic where I was born. Not far from the “village” there is a neolithic settlement that probably belonged to the Saami, the original inhabitants in the north who have been there since the Ice Age at least. The settlement would have been a summer fishing and elk hunting village and it is situated by the shores of a powerful river call Namforsen. A lot of excavations have taken place there and there are perhaps thousands of petroglyphs carved and painted on mighty cliffs by the river and on its islands. The interesting thing is that the majority of the images are of female elks, very few horns in sight. Obviously the elk cow was sacred and the Great Goddess was of her nature. There are ships carved with elk heads and what looks like shaman women. Of course the archaeologists have not noticed any of this and also tend to deny the Saami heritage which I discovered when I travelled to Jokkmokk on the Arctic circle in Saami/Lapland.

I have written all about this in “The Norse Goddess

” book. In my painting the Goddess looks like one of the mystical Seide stones, sacred to the Saami and she wears a crown of elk cow heads. There are great numbers of elks in the Swedish forests today and there are even bears to be found here up north.

I remember going to Namsforsen one night around midsummer, when it was light all night but an eerie light, with a group of women. We had borrowed a rowing boat and we went out to an island where there are a great number of petroglyphs on a great cliff that dips into the water. We got into tapping this cliff rhythmically and felt that we were communicating with the ancestral spirits indwelling in the cliff and that this was the actual purpose of the carvings. This painting came out of that magical experience.