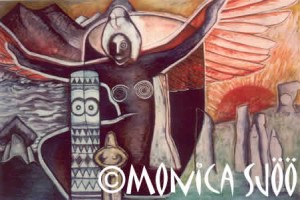 The strange and barren island of Lewis of the Outer Hebrides, islands of Bridge or Brigid. No forests or trees exist here, a barren landscape full of lochs. Deep in the dark peat, cut by the islanders for fuel, there are signs of tree roots from ancient forests that once grew there. The sacred mountain, The Silver Maiden/Sleeping Beauty, dominates Lewis and can be seen from far afield. Here the Moon dances every eighteen to nineteen years, during the major lunar standstill, kissing the brows, belly and breasts of the mountain Maiden while turning back upon Herself and standing still, bathing the mountain in a silvery light. I was there in the summer of 1987, the time of the lunar standstill, visiting with the visionary artist and poet Jill Smith and her son Taliesin who lived there then. We waited amongst the Callanish stones, some of which look like hooded crones, for the September full moon to rise. The stones are graceful and delicately formed and are salmon coloured in streaks of pink, green and blue, so different from the large, unshaped, massive Avebury stones. There are around nine hundred stone circles on the British Isles. They have different functions but are lunar temples tracing the Moon Mother in Her changes.

The first time I travelled to Lewis was in 1982 to meet up with friends there over the Summer Solstice. The power of the sun was immense as She (in Sweden we always say She of the Sun) only disappeared for a few hours and there was nothing between Her and us except the sea, the stones and the barren land. A sense of primordial, in the beginning, times. The next day we made the very long trek and climbed up onto The Silver Maiden mountain. Three hours later we finally reached the cairns that form the nipples on her “breasts” and high above the world there was as if a processional walk …. a bit like on Glastonbury Tor but felt wider and more ancient. I felt ecstatic and eerie as well.

A legend on the island is that people had arrived by boat to Callanish, which is surrounded by sea on all sides, and were led by a winged black-faced priest – or was it priestess. Did an African people arrive to the islands bringing their magic and shamanism?

The painting belongs to Genevieve Vaughan in Texas and it has strange indwelling powers. For seven years it lived on Lewis in the barn where Jill Smith held a permanent show of art inspired by Callanish stones.

« Corn Mother at Newgrange
Gaia – Earthgiantess »
We use cookies on our website to give you the most relevant experience by remembering your preferences and repeat visits. By clicking “Accept All”, you consent to the use of ALL the cookies. However, you may visit "Cookie Settings" to provide a controlled consent.
Cookie SettingsAccept All
Manage consent