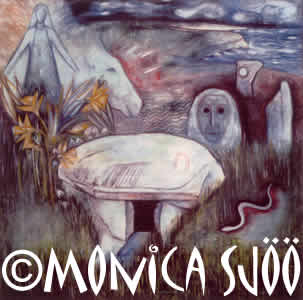 While I was in the USA in late summer 1988, doing slideshows of my art and speaking on the cultures of the Goddess, I spent a Full Moon day in San Francisco with African-American Luisah Teish, the Goddess Woundon-priestess and writer, well-known for her “Jambalaya: The Natural Woman’s Book of Personal Charms and Practical Rituals

“. She is a medium and she communicated in trance with my sons in the spirit world. I have lost two sons in the last seven years. My youngest “dark” son was/is mixed race, his father African-American. He was killed by a car in August 1985. My oldest and “light” son died from cancer in July 1987. Both died on a Full Moon. Since my young sons’ deaths I have dwelt in an inbetween world, neither dead nor truly alive. It is as if my heart and part of my spirit went with them into the Otherworld and since then I have dwelt in the shadows. Luisah however communicated from my oldest son that I could go no further in my identification with the ancient Crone/the Dark One except through death itself and that I must now become like the young maiden of spring: I must transform myself or die. Wise words from a wise woman.

When I returned to England I felt a great need and urge to travel to the Holy Well of Brigid/Bride on Lewis in the Outer Hebrides. I wanted to be there at Imbolc itself when She returns as a young white maiden from Her dark Mother Cailleach’s mountain fastness. She and her Mother are one, they are as the Lunar Mother in Her changes. The Lunar Mother who is both dark and light was always thought to give mind powers and oracular wisdom, as well as bringing fertility and growth. Marija Gimbutas says that during the neolithic period and later, white symbolised death to the dark Aboriginal peoples of Old Europe; the white of bleached bones, hair, ashes and snow. Black symbolised fertility and life, as in the womb where the embryo grows, the fertile soil in which the seed germinates during the winter and the luminous nights when visions and dreams come, when plants grow and wounds heal.

I travelled there at the end of January, during snowstorms and blizzards in the Scottish Highlands, and gales on the Hebrides. I stayed with my friend, Jill Smith, an Earth Mysteries artist and poet, and her son Taliesin, then five years old. Together we travelled in a hired van to where Bride’s Well snuggles in a field near a very wild coastline with ferocious winds and seas. This is on the west coast of the island, not far from Callanish stone circle and the beautiful and powerful Silver Maiden mountain.

We slept in the van overnight and at dawn next morning in the rain and wind we waited by the beautiful little well to welcome Bride, the White Maiden. (There are numerous legends of a ghost-like spectre of a white lady seen by many wells).

Later that day we passed the vibrant stones of Callanish and then, late at night, the greatest treat of all we saw the Northern Lights! Almost as if the candles or torches from Bride’s body or head flared across the skies with great arching white lights. It was truly wonderful and we were totally awestruck as we stood in the darkness for hours enchanted by this radiant presence and proof of the powers of the Maiden Goddess of spring.

Next: Bride/Brigid with her Tree, Well and Stone