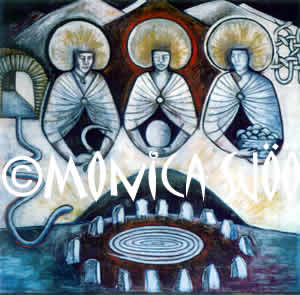 I was travelling in Germany and in Scandinavia in the early 80s with an exhibition called “Woman Magic, celebrating the Goddess within us”. We were four women artists and it was shown, in amongst many other places, at the Frauenmuseurn in Bonn and the Women’s cultural centre Rhiannan in Cologne in the Rheinland. Whilst there I was taken to visit the German/Roman museum next door to the cathedral. In there I saw a number of very impressive stone carved images of the seated Matronae/Dea Matris or Triple Mothers. They showed dignified, mature women wearing great lunar or afro headdresses, holding fruit and bread in their arms. I believe that they are most ancient and, like the Scandinavian Norns or Disir, belong to the Pre Indoeuropean peoples of old Europe.

The Romans feared the Matronae and called them “Sorceresses of early days”. Under the Cologne cathedral there was a Roman temple dedicated to Dionysius with a large mosaic floor intact but at an even much older level there was a holy well venerated by the Celts. The Matronae, their oracular priestesses, presided over the sacred wells within great enclosures that were surrounded first by wooden groves and later built in stone. There were more than a thousand such enclosures in Gaul and Germany. Uppsala, the great Pagan centre in Sweden, was originally dedicated to the Disir or Norns, deified ancient Mothers of the Vanir people of the north. I believe that theirs were great mysteries now lost to us.

By c.500 AD the Christians set about demolishing their shrines and delighted in knocking off the heads of the Matronae, a symbolic form of Matricide. It was said that powerful rituals were performed where the Matronae presided, rituals involving music, dances, ecstatic sexuality and magic. Also men’s societies met in the enclosures of the divine grandmothers and there they danced wearing crane masks imitating birds with arms outstretched, bells on their toes, gyrating hips and spiralling into a shell or vulva/labyrinth. Obviously most “unmanly”. From the Matronae’s German name “Die Beten” comes in all German languages the words for “to pray” as in Swedish “att bedja”.

I found in German (non-feminist) texts that the Matronae were Sun, Moon and Mother Earth. The Norns, who are older and more powerful than all gods, keep the World tree alive and to them belong the life-giving, healing and wisdom-giving holy wells. They, like Spiderwoman of the Hopis, weave, maintain and cut the thread of life. They create the cosmic electronmagnetic web that vibrates, dances and is ever changing. The Norns brought about Ragnarok, the end of the world when the New Indoeuropean male gods had offended the cosmic order through their deceitful and warlike ways. Will this happen again?

The painting belongs to Alice Walker.