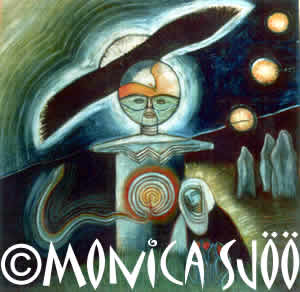 Africa is the ancient heartbeat of the world and the human race as we know it originated there. The Great Mother, our ancestor, was indeed black. It seems that genetically one specific African woman in the mists of time was the Mother of us all.

Mawu, African Goddess, was said to have serpents in Her belly. She was Mawu-Lisa, bisexual and imaged as a serpent. S/he was self-fertilising and seen as both earth and rainbow. S/he was both female and male. In ancient African beliefs, the sky gods were the creation of Mother Earth: she breathed them out and could breathe them back again.

There are a great many images, in clay and stone, from neolithic times of the Goddess as bird-masked or serpentine. Here the Goddess as sky being takes on a bird form and according to Marija Gimbutas in “The Language of the Goddess“, carries the cosmic egg in Her extended buttocks. Bird costumes were used by the ancient Shaman priestesses of the Great Scandinavian Goddess Freya to fly in to the spirit realms. When She appears as the under-the-Earth, chthonic Goddess of the subterranean waters, of the Blessed Dead who live on within Her womb awaiting rebirth, She is imaged as a great serpent or dragon.

On Crete in the Bronze age, the Goddess and Her priestesses carried serpents in their arms. The religious ideas of both Crete and of Egypt may have originated in black Africa. In Egyptian hieroglyphics an upraised cobra signified “Goddess” and the cobra emanating from the forehead, the Third Eye (Ajna centre to the Hindus), signifies oracular, advanced psychic powers. The serpent has a lunar nature and like the Moon, it appears to die and regenerate itself when it sloughs its skin. All waters move in serpentine formations, including those in our bodies and brains, and are ruled by the radiant Lunar Goddess. She moves from Maiden, Mother, Crone to the Queen of the Dead, in Her light-filled Otherworld.

In my painting the serpent emerges from the Labyrinth within Mawu’s belly. The Labyrinth has throughout time been seen as the place of entry into this world from the fiery and dark womb of the Earth Mother, and the place of return into Her to await rebirth. It represents Her still centre or a womb and as one treads its windings, sometimes to the left and sometimes to the right. One connects with the Mother’s great creative powers of life, death, rebirth and immortality as well as the two parts of our own minds/brains.