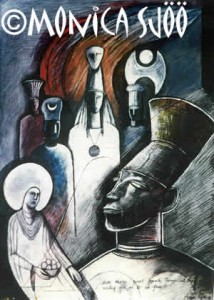 Are there Great Female Beings out there
waiting for us to be free? (mixed media, 1996)

And the answer is “Yes!” Ever since the late 60s when I started to do women and Goddess centred paintings, I have had a sense that ancient women were communicating with me in visions and dreams. It felt as if I was being used as a medium and that my paintings came from another, an archaic time. In 1973, in London during our Womanpower exhibition when God Giving Birth was nearly taken to Court, a zen-type, light-flooded dramatic moment occurred in which I “knew” that past, present and future coincide and therefore this ancient sisterhood is with us now and in the future. We are each other’s ancestors and descendants. While visiting Beneficio, the Rainbow tipi village in Andalucia in 1994, I experienced a crisis and great anger at the male dominance and presence of mainly male god images there and I cried and screamed. A woman healer, Fiona, gave me Reiki and I then “saw” surrounding me a Sisterhood of mainly older women of many races, wearing gowns and high headdresses. The one I saw close up was an old African woman with a large, wise face. Was she an ancestor of my young mixed-race son? During a visualisation-meditation with Bob Stewart (workshops on the Faery realm) I suddenly and equally dramatically “knew” that I am one of this sisterhood but had chosen to come back here. I felt great grief, sadness and loss at this. It also explained a lot. Are my paintings “portals” for them into this realm? If this sounds crazy .. so may it be.

The words I heard when I “saw” the sisterhood were “Are there great female beings out there waiting for us to be free?”.

Next: Women have only their Chains to lose…

« Women’s Mysteries
Women have only their Chains to Lose and The Lovers »
We use cookies on our website to give you the most relevant experience by remembering your preferences and repeat visits. By clicking “Accept All”, you consent to the use of ALL the cookies. However, you may visit "Cookie Settings" to provide a controlled consent.
Cookie SettingsAccept All
Manage consent