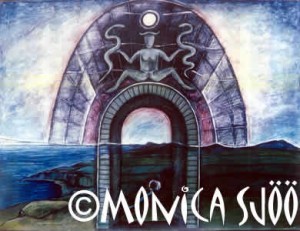 A vision I had at the well of the Goddess/Sheela as the gateway to the Otherworld or Faerie realm. She straddles the portal, giving blessings and healing to the people, over the portal of St. Non’s chapel which here becomes transparent. The “Sheela” is in fact Freya as she is shown on a stone carved in the 5th century CE (common era) on Gotland, which is an island belonging to Sweden in the Baltic. There are many ancient remains there such as large labyrinths and Bronze Age stone ship settings.