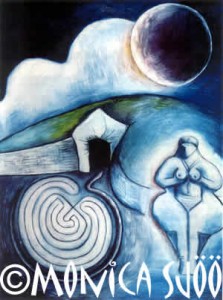 Ishtar/Inanna, Queen of Heaven and
the Underworld (oil, 1991)

1991 was the year when USA and Britain started their genocidal war against the Iraqi people using depleted uranium and high tech weaponry that kept them safe up in the skies whilst cowardly bombarding the people below. To not implode with grief and rage, taking part sometimes daily an anti-war demonstrations. I needed to create a painting. Ishtar/Inanna came into the painting and she just happened to be the Great Goddess of the first Sumerians and then the Semitic Babylonians of Mesopotamia, ancient Iraq. I also identified with Her as I myself had lost my beloved son, only fifteen years old and like Inanna I felt that I went into the Underworld seeking him and was hung up bleeding on a meat hook down there, having lost everything and not wanting to live.

The long barrow is called Stoney Littleton and is situated not far from Bath. It is very beautiful. A great labyrinth and the serpent take us into the womb of Mother Earth and into the dark birth channel and the dark chambers within the mound/barrow. I saw that Full Moon in its dramatic clouds on a New Year’s Eve, my birthday, in South Wales.

Next: Meeting the Ancestors at Avebury