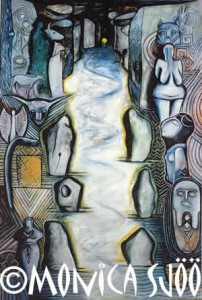 Avebury stone avenue snakes its way across the fields, the stones incredibly expressive. I know every one of them by now. Always different …… in changing lights ….. when wet, which brings out intense colours or dry, quartz embedded in the stone itself ….. sometimes alive and vivid and other times static and not communicating. The stone avenue in my painting leads into West Kennet long barrow but this is not so in reality. My poetic licence. Within it shines a little candle for a friend who died and all around are images of the Goddess from the Neolithic that I took from Marija Gimbutas’s book “The Language of the Goddess“, a book so astoundingly beautiful, a treasure). It so “happened” that as I was working on this painting late in January 1994, Marija was dying from cancer after a long struggle. She died on Imbolc itself, Bride’s day. She would! So ….. I call this painting “Rites of Passage” for Marija’s journey to the Mother. It is on the cover of the anthology “From the Realm of Ancestors

” (edited by Joan Marler and published in 1997) which celebrates Marija’s life and work. A great soul and a courageous woman.

The painting was bought by Joan Marler and now hangs in the Marija Gimbutas archive in California.

Next: Bride’s Well at Imbolc