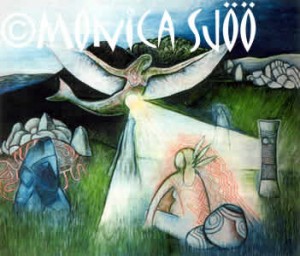 It was the first of January 1996, the day after my birthday on New Year’s Eve and I was walking with a friend in the dusk in the mountains near the sacred Carn Ingli (Mountain of Angels) in South Wales, high above the world. I looked up and “saw” a great white bird in the distance with a brilliant light shining from its belly. I was amazed and was going to ask my friend if he also had seen it. But when I turned around again I “saw” a car with its headlights on. The point being that I saw both! When I returned to Bristol I found that I had written in a notebook a few weeks earlier of a dream in which I saw a winged fish – or serpent-tailed Goddess – and I heard the words “And Her belly lit up the world”.

There are strange magnetic anomalies at the summit of Cam Ingli and there are remains of neolithic settlements here high above the world. The legend goes that St. Brynach, probably a pagan god turned into a saint by the Church, lived up there and was fed by the angels. Carn Ingli is part of the Preselau mountains domain Cerridwen and where the Stonehenge Blue Stones were brought. It is an area full of magic and faerie legends. Pentre Ifan cromlech is not far away and Nevern Church and graveyard with its beautiful golden Celtic cross and ancient yews, one of which is the “Bleeding Yew”. It is said that St. Brynach carried the tall and immensely heavy Celtic cross on his shoulders to where it now stands by a little Church named after him. Carn Ingli is a place of strange dreams and trance states. I did many important paintings whilst living in south Wales and I felt very strongly the presence of spirits in the land itself.