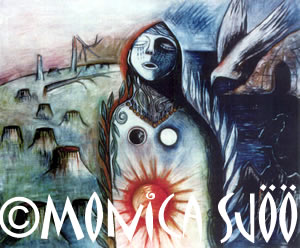 Mother Earth in Pain: Her Trees Cut Down,
Her Seas Polluted (oil, 1996)

I did this painting after twice visiting Newbury, with women of our Bristol AMA MAWU group, walking the old and beautiful woodland within 14,000 trees that were supposed to be sacrificed and cut down to make a bypass for motorists, supposedly saving them five minutes driving time. We came back again and happened on an occupation of Tarmac’s offices in Newbury. I used to go to Greenham Common women’s peace camps nearby in the 80s. Now there were “Ecowarriors”, women and men, living in “houses” high up in the threatened trees trying to save them. There was a battle lasting months but in the end they were defeated and the trees cut down. I felt great pain and grief as I grew up in the north of Sweden with the vast boreal birch and pine forests that once originated from the Siberian primordial Taiga forest. I love the forest and its magical beings, the delight of my childhood. The patriarchs, however, always hated the forest which is female, dark, damp and impenetrable and ruled over by a great female spirit. The Hebrew prophets, acting on behalf of Jahveh who hates the dark Mother Earth, cut down the sacred groves of the great Semitic Canaanite Goddess Asherah, the Christians demolished the tree enclosures of the Old European Triple Mothers …. in Germany and elsewhere. Today the great rainforests of Brazil and the Taiga of Siberia are under onslaught. The Earth will turn into a desert and there be no water or topsoil if the forests die. We will not be able to breathe.

At around the same time as the battle for the tree land at Newbury, there was a terrible oil slick from a stranded oil tanker outside of Milford Haven in South Wales, near where I had lived for five years in the 80s. My beloved and most beautiful Pembrokeshire coastline was fouled and polluted and thousands of birds died covered in black oil.

I first experienced the pain of Mother Earth during an altered state on sacred mushrooms on Silbury, Earth’s pregnant womb, in 1978. The Yews of Europe, the Redwoods, Cedars and Douglas firs can become thousands of years old and are venerable ancient beings who live in a different timescale from us, their branches high in the sky and their roots deep in the Mother’s dark soil.

Soon after I did the painting in 1996, I decided that I wanted to use it in political action and I brought it to a spring equinox ritual a group of us (around twenty women) from AMA MAWU and Rowantree eco-feminist group were performing outside the gates of a Bristol University research station at Long Ashton – (Ama is a word relating to mothering – breast feeding in Sweden and in many languages and Mawu is a great West African goddess). Genetically “modified” or rather engineered wheat was experimentally grown there, partly funded by the giant US multi-national Monsanto which is set upon dominating (and polluting) the world’s food supply. Some of us were at the time involved in the Genetix group, active against GM foods. Mother Earth Herself in my painting is based on a neolithic sculpture to be found in the great feminist Lithuanian archaeologist Marija Gimbutas’ book “The Language of the Goddess“.

Next: And Her Belly lit up the World