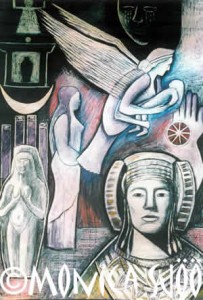 I was on Ibiza – an ancient island of the Phoenicians in the Bronze Age and a sacred centre of their Great Goddess, Tanit, who said I am the beginning and the end” – when I discovered that I had a cancerous tumour in my breast. It was February of 1997. Although the tumour was five centimetres by then, I had never noticed it. I learned that Ibiza, which was called “The Island of Pine Trees”, was a place where people came to be healed and also to die. It was a colony of the Carthaginians/Phoenicians from north Africa. There are many wells here sacred to Tanit, whose mysteries were forgotten when the Romans destroyed Carthage (Tunisia). She was the same Goddess as Astarte of the Canaanites (also a Phoenician-Semitic people) who was hated by the Hebrew prophets and their Jahweh. Tanit was also African Berber in origin. In this image are the hand of Tanit (later the hand of Fatima?) and other symbols. Here is La Dama de Elche, found in Andalucia and representing the Goddess herself or Her priestess, wearing extraordinary headplates and heavy jewellery, so mysterious. Apparently Ox T’art means “womb of the Earth”, so in Ash T’art there is the word “womb”. The Siren or Serene carries the soul of the dead to the Otherworld.