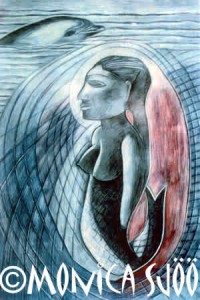 According to Luisah Teish in “Jambalaya: The Natural Woman’s Book of Personal Charms and Practical Rituals

“, this ocean Goddess or Orisha of West Africa is called Yemonja in Africa, Imanje in Brazil, Agwe or La Balianne in Haiti and New Orleans and Our Lady of Regla/Mary Star of the Sea as a Catholic Saint.

Her body is both fishlike and serpentine. She is the Goddess of childbirth and creation and the birthwaters of Her womb created the great oceans. We commonly think of the oceans as the Mother of all life, so this is very apt.

Water has memory and is like a great sense organ. It shapes and forms and creates. Life is created in the dark deep depths of the oceans where underground vents spew forth heat and hot life-giving waters and light from the magma within the belly of the Earth Mother by fault lines in the Earth’s crust. I have explored the powers of the waters in my book “New Age and Armageddon: Goddess or the Gurus? – Towards a Feminist Vision of the Future

” (The Women’s Press, London 1992) and every aspect of the Goddess and Her ancient cultures, Her mysteries, have been explored in “The Great Cosmic Mother: Rediscovering The Religion Of The Earth

In my image the waters are also a web …. it is striking how water patterns are so similar to the symbolism and images on neolithic stones and Goddess images. According to Marija Gimbutas in “The Language of the Goddess“, symbols for watery energies are indeed most prevalent and common in Goddess ‘language’ and signs from the Neolithic.

Yemonja is swimming with a dolphin. An old word for womb is relating to the word dolphin and with Delphi, the Greek sacred shrine where oracular mediumistic priestesses breathed in the fumes from the underworld and prophesied, the spirits of the dead speaking through them. This was a very ancient sanctuary of Gaia and Her omphalos, navel of the Earth and her python. The python was slain and Apollo’s priests took over the venerated shrine but they still had to listen to the prophesies of oracular women.

I would be very interested to know what is the relationship between ancient women, Goddess cultures and the whales and dolphins now known to be the most highly evolved and intelligent beings on this earth and have great psychic and telepathic powers of mind.

The Sumerian creator Goddess, Tiamat, was known as a Leviathan or great whale. The Inuit Goddess, Sedna, is Mother of the oceans, of the spirits of the dead that come to Her after death and She is the mother of all sea animals, fishes and beings. She is the most powerful and important deity to the Inuits of Greenland who entirely rely on the sea and Her protection for their lives and livelihoods.

In patriarchal religious beliefs the male creator god is seen as all fire, sun and light and is seen to wage war on the dark Earth and Her waters while in reality life itself cannot exist without the benign co-operation of all the elements. This is the sole reason why all patriarchal religions become so life-denying and destructive as they attempt to create impossible polarities and dualities that do not exist in the world of the Great Mother who is Sky, Earth, Water as well as Sun, Moon and primordial Fire, who is both Dark and Light. Life simply could not evolve in a continuously fiery and light-filled world.

Next: The Mother of All Crop Circles