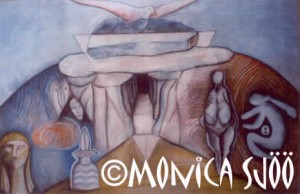 West Kennet Long Barrow is a womb/tomb and temple, a place of shamanic initiation and out-of-body journeying to communicate with the ancestor spirits that dwell here within the temple and womb of the most ancient Mother of the tombs. I have slept and dreamt within this long barrow, meeting some extremely primordial ancestor-beings in my dreams, on a dark moon night in July 1991, which is not surprising considering that West Kennet is one of the oldest megalithic structures in the world and could be from the 5th millennium BCE. It was built by early neolithic peoples to reproduce the darkness and powerful presence of the maternal cave, womb of the Mountain Mother. The outside of this elongated mound was originally approximately fifteen feet high, made of stones and earth and was covered in white chalk so that it gleamed in the moonlight. Silbury itself, built later, was also originally chalk white. West Kennet’s elongated entrance recreates a vaginal birth channel and its interior womb chambers lie beyond, within the darkness. This is a place of high energies, a space where all outside influences are cut off and one is left with meditative dream and trances states created and experienced by the lunar right-brain mind in us all.

This is no mere mortuary tomb, no more so than a Gothic cathedral where dead are also buried. There is the possibility that some people were buried here (in some long barrows no bones have been found at all) but could have simply been the guardians of/or the guides to those undertaking initiations within the womb of stones. The burials that have been found have been completely egalitarian, the bones of women, men and children together.

The neolithic women brought about the agricultural revolution through their knowledge of plants – both edible, healing/medicinal and psychedelic. It was early women’s inventions that made the first settled farming cultures a possibility. Women invented tools and crafts. They were the artist-potters, the healers, shamans, oracles and astrologers. Powerfully creative and sexual women originated human cultures and the religion and lunar/menstrual mysteries of the Goddess was their practice and creation as they perceived the universe as a great maternal being weaving the web of life and spirit.

West Kennet Long Barrow represents the Mother of the Dead, the dark Crone of winter and the death of vegetation, the time when the seed germinates within the dark and fertile soil. Across the field rises Silbury, the pregnant womb and Harvest Mother where the neolithic farmers witnessed the mound giving birth to the Harvest Child in August and even further in the distance stand the stones of Avebury stone circle where the May Day ecstatic sexual rites were celebrated with the coming of summer and the Goddess having grown into motherhood from Her Maiden beginnings in the early spring.

The whole life cycle of the Goddess, the external cyclic life of the seasons, Earth and vegetation, of the Sun (in ancient times the Sun was most often a Goddess also) as she brings forth new life with Her love and warmth, and of the Moon can be witnessed here within just a few fields on Wiltshire plain. Here was enacted the Northern Mysteries of Demeter, the Corn Mother, and Her daughter Persephone who becomes the Queen of the Underworld in winter, who rises and returns to Her Mother at spring with the newborn corn as the radiant young maiden, Kore.

The images of the Goddess that I have painted on the long barrow are some of the most ancient, going back to Palaeolithic times and found in the caves. The vaginal triangle, here shown as pure light radiant, is one of the oldest of such symbols.

I did this painting after returning from Lewis on the Outer Hebrides, a time of magic and inspiration. I had been there for Imbolc (Bride’s time) at the end of January/early February and had seen the Northern Lights across the sky, Bride’s flames and Her holy wells. The long-barrows is where She dwelt as the Mother of the Spirits, as the great womb within the mounds and stones where our dead ancestors live on. The entrance is a huge vagina of light through which one enters into the deep, almost fearful, darkness of the womb/tomb chambers. She is both the Ancient One and the Maiden of Spring, Cailleach and Brigid/Bride and Her mysteries are great. I have included images of the Palaeolithic Goddess of the caves and petroglyphs. The great bird rises like a Phoenix from the outline of the Hag mountain on Harris which looks like an old black woman resting, as on a sarcophagus, on its summit.

The painting belongs to the Swedish-American dowser, Sig Lonegren in Glastonbury.

Next: Rites of Passage