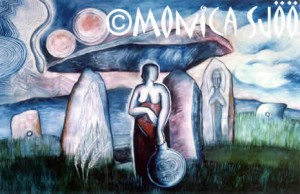 Triple Goddess at Pentre Ifan Cromlech/
The Womb of Cerridwen (oil on hardboard, 1991)

I lived in Pembrokeshire in southwest Wales/Cymru for five years, from 1980-85, in a cottage in a hamlet near Fishguard. After the initiatory experience of the Goddess of Silbury, I felt a great need to live in the countryside with Her seasons, following the cycles of growth and death in nature, and to be close to the sea, to the night and day skies. In cities one never experiences the Moon in Her changes and the darkness is banished in streets where the god of artificial electric light rules. This has done great damage to our women’s sense of our lunar/menstrual rhythms and sexuality.

I experienced a great ancientness in the land of Wales and there are many remains from both neolithic as well as early Celtic times. There are many cromlechs or Dolmens that I came to know but the most powerful and dramatic, both in its structure as well as in its setting, high up on the slopes of the Preselau mountains off the Cardigan Road, is Pentre Ifan. Originally with a homed/lunar forecourt of stones, it is a ‘gateway cromlech’, clearly an entrance, to an oblong or egg shaped earth mound that no longer exists but the outline of which one can still see. The Druids called it ‘The Womb of Cerridwen’ and used the mound/womb as a place of initiation, spending days and nights within its darkness seeking death and rebirth, as shamans have done in all ages within the caves and in the wild and remote places of the Earth.

Cerridwen was/is an great Celtic (or pre-Celtic) Goddess and to Her belongs the magical cauldron of transformations. The cauldron was the womb of the Goddess filled with Her life-giving and trance-inducing menstrual liquid that brought about shapeshifting and transmutations. Cerru means cauldron. To the later patriarchs Cerridwen was the archetypal ‘witch’. Her cauldron became the Holy Grail forever pursued by King Arthur’s knights and was then transformed into the Chalice of the Catholic church, but instead of being filled with the magical life-giving blood of the Goddess, it now contains the blood of a crucified man.

The Blue stones of the inner, older and lunar/horseshoe circle at Stonehenge were brought from the Preselau mountains and on Cam Menyn, one of its peaks, one can see stones looking very much like the ones at Stonehenge, almost freestanding and not needing to be quarried. Is it possible that the Blue stones were brought from a stone circle of Cerridwen up in the mountains? This is Her domain. Were the stones considered equally precious because they turn blue when wet?…….. waters and the colour blue always being sacred to the Goddess.

In the summer of 1990, I experienced sleeping on a very rainy night, under the capstone of Pentre Ifan and having strange visions and dreams. I got soaking wet. It was this experience which made me do this painting. I dreamt of cromlechs for weeks thereafter ………..

There are many legends of fairy paths, fairy lights, etc. around this area which stretches from Pentre Ifan on the Preselies above the Nevern that cradles by the river of the same name, in the valley several miles below. In Nevern there is an old graveyard with ancient gnarled Yew trees, the tree of the Goddess of the Underworld and the dead. The bleeding Yew has a sap that looks, smells and tastes like blood.

There is also the magnificent Celtic cross of St. Brynach’s that glows golden from the red-golden pollen of the trees. It is one of the finest Celtic crosses still standing in the world.

Pentre Ifan cromlech, formerly called “The Womb of Cerridwen”, was a gateway-entrance into a great oval or egg shaped mound where shamans, and later the Druids, would spend days and nights in visionary initiations. The cromlech stands on the edge of the Preselau mountains with a magnificent view over the sea and distant mountains. Nearby is an enchanted faery wood called Tycanol forest where dwarf oak trees grow out of moss covered boulders. From there, as from Wistman’s Wood on Dartmoor in Devon, came the Wild Hunt of Spirits led by Hel, Nordic Goddess of the Underworld, or by Odin. In the valley below, by the Nevern river, is the graveyard with the Bleeding Yew Mother. And everywhere there are faery paths and legends. I spent a night sleeping under the capstone of the cromlech, trying to hide from pelting rain on a very dark night, together with some of the AMA MAWU women from Bristol. We were on a magical mystery tour and this was the night after the full moon. I was sitting up in the middle of the night trying to draw the stones, holding a flashlight, barely able to see. For weeks after that I kept dreaming of cromlechs (chambers of stone) and did this and other paintings of Cerridwen as Maiden, Mother and Crone.

Next: Mawu, African Mother of Us All