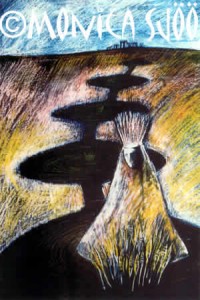 p align=”justify”>A huge and beautiful crop circle appeared within view of Stonehenge. I happened to be going with a Welsh friend to that summer’s Big Green gathering where I gave a talk about, and was critical of, the New Age movement in the X File Avenue. I was the only speaker there to question the New Age movement. My book “New Age and Armageddon: Goddess or the Gurus? – Towards a Feminist Vision of the Future

” had been published by The Women’s Press in London in 1992. On the way to the gathering from the station, where we were met by some women by car since I also was going to speak in the Women’s dome, we made a detour – a very long one as it turned out – to visit the crop circle which was immense and consisted of many circles forming a great spiral in the field. The rumour had it that a helicopter had flown across there and nothing was to be seen but when the person returned an hour or so later, in full daylight, there was the immense spiralling crop circle formation. So much for them being “man made”. The Spirit of the corn appeared magically as if drawing Herself. Is this the Corn Mother?

Next: Mother Earth in Pain…