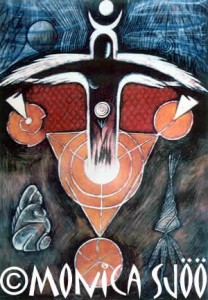 The summer of 1991 became to me the summer when I found myself again and again in or by crop circles in the Wiltshire area. I was a ‘teacher’ doing workshops at the Oak Dragon “Ancient Albion” camp near Swindon and we explored the huge crop circle formation at Alton Bames. I slept one Full Moon August night on Silbury with some friends and when I awoke in the early morning at dawn, I saw a small crop circle in a field across the road from Silbury. I sat in that circle as the sun rose, drawing and listening to the ripe corn popping all around me – an eerie feeling here in the stillness and all alone as I was.

I arrived with a friend to take part in the “Wise Women’s Weekend” in July at Lower Shaw Farm, also near Swindon, where I was to do a slide show of my art. After lunch the twenty-five women decided to go to a newly formed crop circle under Barbury Castle earthworks and naturally we went with them. We were absolutely knocked out by the beauty and vastness of this geometric and intricate formation and felt lost, as if in another time space. And so it went on. I took part in crop circle discussions … what are they, what creates them and why … are they messages from the world of the spirits … is Mother Earth warning us, etc., etc and I found myself exhibiting some images and listening in on the “Corn-ference” organised by Roland Pargeter in Glastonbury at the end of July where I was angered by the male dominance, New Age men setting themselves up as “experts” on crop circles. They fabricate patriarchal theories of how “Secret Masters”, “Space Brothers”, “Aliens” – you name it – create the circles but never, never Mother Earth, Herself. John Michell did say though to his credit “Be quiet and listen, Earth Mother is speaking.

During this conference I went for a breather to the Chalice Well gardens, nestled in the skirts of the Tor …. to meditate and dream by the Holy well of the Goddess known as “Blood Well’ because of its red waters. As I was sitting there, this image of the dark winged and radiant Bird Goddess emerging from within the Barbury Caste crop circle came to me. She is also creating the circle and is its spirit.

Chalice Well produces trance states if one allows one’s mind to empty and wander and I have found both images and poems coming to me there in this state of mind.

Crop circles started to become more and more noticeable from c. 1988 when they started to appear around Silbury. Warminster was another centre and this also happened to be the very area where so many UFO sightings had taken place years earlier. Inevitably people started to make connections between the two unexplainable phenomena.

Many crop circles have appeared below ancient earthworks and below the turf-cut White Horse images that represent Epona, the shamanic white mare Goddess of the white chalklands in the south of England. It is therefore inevitable also to make the connection between the Goddess or Corn Mother and the crop circles that appear under or by so many of Her sacred places. Terence Meaden, scientist and meteorologist, sees the crop circles as created by plasmic vortex whirlwinds. But then, one can well ask what is a “whirlwind” and might it not be an emanation of spirits that are not visible to us since they come from another dimension of reality or the Faery realm.

I can only say that as an artist I have been amazed at the beauty, the gently swirling and spiralling patterns created by the corn, the blissfulness and awe felt within them by so many and the opening of people’s psychic awareness which has happened thanks to the crop circles during the last few years.