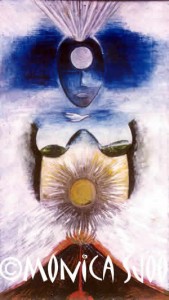 I took part in a healing meditation in Bristol soon after my son died from cancer. We were asked to visualise the chakras or energy centres of our bodies. I had intense images that came flooding in and I saw my own woman’s body and its energy centres as that of the Earth’s body – from deep within the Earth, Her red-hot magma, through the volcano erupting with immense orgasmic energies in the sexual centre. Then I saw the radiating sun in the solar plexus, which needs to be protected, and then the breast and heart. It struck me that the heart chakra is green because the green Earth is about love. Plants and trees and all green beings give out love and create oxygen that makes life possible for us. Without them we could not live. This felt like a revelation and changed my attitude to the colour green in all its shades. I experienced the third eye as the Moon. It also became clear to me that all the charts and figures I had seen of chakras and the body have been based on the male body. I felt that what I saw came from a different space: my woman’s experience of body, sexuality, cosmos.

In conversation with my friend, Serena Roney-Dougal, Doctor of Parapsychology and author of “Where Science and Magic Meet

” and “The Faery Faith: An Integration of Science with Spirit

“, it became clear to me that the classic Hindu chakra system and philosophy is in fact based on the male body and ignores the vagina, a body orifice that only women have and source of great multi-orgasmic sexual powers. Our nourishing breasts, that are loving and giving, are also ignored although central to the energies of the heart-chakra. But we should not be surprised that women’s divine and sexual life-giving powers are ignored, also in the ancient venerable Hindu teachings since after all women are seen to give birth to illusionary life that traps the male spirit and is but a source of pain and misery. The Earth Mother is not seen as divine, Her powers and beauty denied.