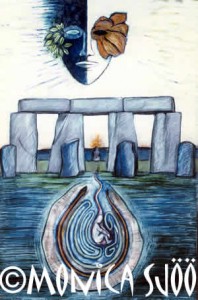 This is the only image that I have done that is based on Stonehenge. I have never related to those great stones which I experience as alien and as having been the scene for much violence in the past as well as in recent years when, for a period, there were yearly battles around the summer solstice when New Age and old age travellers sought to reach the site for rituals and celebrations. They were stopped by barbed wire fences and police. But the ancient Sun was a mother and Stonehenge can be seen as Her womb. At midwinter, as at New Grange, the sun can be experienced as being reborn from between Her great thighs. I did this image in a cottage in Wales while I was waiting for my granddaughter to be born.

In my painting she is being born from the labyrinthine womb of Stonehenge. I have never really related to this stone monument and it has never spoken to me the way Avebury has. I also associated it with a lot of violence both in the ancient past as well as very recently. But at the same time it is an ancient Goddess place where both sun and moon were worshipped and the beautiful inner horseshoe-shaped Bluestone circle stones were brought from my beloved Preselau mountains in south Wales. They came from Carn Menyn and I have visited there after a very long climb. I saw the almost freestanding stones turning blue with the setting sun. Did the stones come from a sacred site belonging to Cerridwen, the pre-celtic Great Crone Goddess of the mountains? To her belonged the cauldron of inspiration and transformations. The Womb of Cerridwen or Pentre Ifan cromlech is not far away. I have taken part in a pagan gathering within Stonehenge in the dark night when I called in Hel, the Nordic Goddess of the Other/Underworld … in Swedish. There is power and magic afoot also amongst those monumental stones. Here my interpretation of the Sun Goddess at Midsummer solstice at Stonehenge.

Next: The Spirit of the Corn