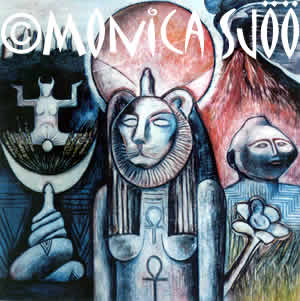 Lionheaded Sekhmet, whose name means “Mighty One”, is a very primordial Egyptian deity. She is Goddess of the creative fire that gave form to energy in the beginning of time. She carries the solar disc on Her head and the magic powers of the uraeus serpent emerges as the Third Eye on Her forehead. The serpent has been called “fire-spitting”. Sekhmet was one “Great of Magic” and Her sorcery made Her a matron of doctors, veterinary surgeons and bonesetters. In ancient times, women and men priest-physicians practised side by side in the temples of Egypt. Papyrus have been found from the third millennium BC with prescriptions for both contraception and abortion. The shaman-priestesses of the Goddess were also healers and midwives, and they guided the dying on their journey back to the Spirit realms. The precincts where the women gave birth were the most ancient sacred enclosures. Oracular priestesses dwelt by the birthing wells prophesying and healing. Sekhmet is a goddess of Nubia, African upper Egypt or Khem: Land of the Blacks.

The Patriarchs, however, thought Sekhmet was blood-thirsty and war-like. By them She was called “Crusher of hearts”, a demonic messenger of death. They feared the power and fierceness of the lioness like they feared the great creative/destructive power of Kali, ancient Black Mother of India.

When the patriarchs took power, they always demonised and distorted the meaning of the Goddess with her creative and destructive powers, her darkness and light. Many aspects of the Goddess were cast as simply evil, dark and destructive. Women’s menstrual, active, powerful and wild sexuality was resisted because it was not fertile. To the patriarchs, only receptive, child-bearing heterosexuality in women was acceptable.

We are now living at a time when the Pacific ring of Fire, the volcanoes of the Pacific rim, are becoming alive. I did this painting while there were volcanic eruptions in the Philippines. It is also a tribute to the Hawaiian Goddess Pele of the volcanoes. The Earth Herself is erupting in volcanic rage and earthquakes. We must recognise the great creative fire within ourselves and fiercely become active on Earth’s behalf. We need to resist those who are out to rape, slay and exploit Her.

My painting of Sekhmet now belongs to the Sekhmet Temple in the Nevada desert but as it is open to the elements, the painting is housed in the women’s dormitory nearby. In the temple are sculptures – Sekhmet and La Madre del Mundo – by the late Marsha Gomez, an indigenous Mexican American artist and activist.