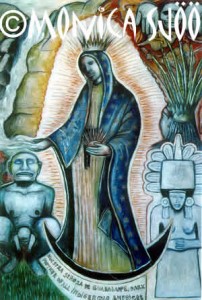 To my great surprise, I have found myself, a northerner, drawn to the indigenous Dark Mother of the Americas. I was travelling in the USA in 1999 during the launch of my book “Return of the Dark/Light Mother or New Age Armageddon?: Towards a Feminist Vision of the Future

” which was published in Austin, Texas by Plainview Press. During the six week tour I got ill and exhausted with bronchitis and continuous coughing. Whilst in Texas I had previously been introduced to La Senora/Our Lady by a feminist nun in San Antonio. As I travelled, finally to end up in San Miguel de Allende in Mexico and Mexico City itself, Her call became louder and louder. I found myself delirious, feverish and hysterical on a New York airport, having missed the connecting flight to Mexico and was put up in a hotel overnight. I managed to sleep a few hours and had a marvellous visionary dream. I dreamt that I saw all the world’s Goddesses swirling and rotating in a great pyramidal form and at its summit stood Our Lady of Guadalupe radiating a great and blessed light. When I finally arrived in Mexico City, I was still ill and I was alone, speaking very little Spanish in this vast, dangerous and very polluted city but somehow I felt protected. I managed to sleep all night in the cheap hotel room situated close to the grand El Zocolo or plaza in the city centre. The Aztecs practise their ancient dances here in front of what once were their temples, long time gone. I knew in my sleep that even if I crawled on my knees, I had to get to Tepeyac, the sacred site where Nuestra Senora was seen hundreds of years ago by an Aztec shepherd. Here stood the ancient temple of Tonanzin (the pre-Aztec Goddess) and below the rocks and waterfalls are the chapels and great cathedral dedicated to Our Lady. She is Tonanzin reborn. She is NOT Mary of the church even though the Catholic church attempts to whiten Her and make Her look submissive. There is, however, a sculpture group, high in the rocks and by the waterfalls of Nuestra Senora, hands out-stretched and dark skinned with a group of Aztecs in traditional clothes and ornaments, very beautiful, giving Her gifts. She simply said, ‘I am the Mother of your people”, which is very different from the vision of Mary the Virgin that appeared at Lourdes and obligingly said ‘I am the immaculate conception”. The whole day at Tepeyac was blissful and I was surrounded by mainly indigenous Mexicans. Every time I entered the cathedral I cried my eyes out but so did everyone else. She has always stayed with me.

Huldra, Nordic Queen of the Forest