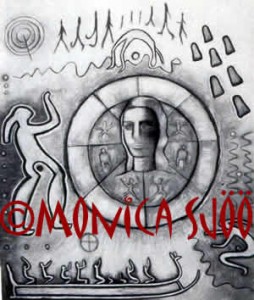 I visited Tanum on the Swedish west coast where there are innumerable petroglyphs carved on the cliffs all around the area, not far from the sea. This is a World Heritage site. The symbolism is very different from the neolithic elk cows at Namforsen and probably belonged to the Vanir people who used magic instead of swords and whose great Shaman Goddess was Freya, before She was co-opted by the invading Aesir Indoeuropean warlike people of the Iron Age. Freya was both solar and lunar and she owned the bird costume used for shamanic flights. Her shaman priestesses were the Valas and Valkyries. Everywhere at Tanum there are dancing joyous figures, priestess acrobats doing somersaults over boats, men in ritual battle, solar wheels, etc.

Next: Nordic Mother of the Animals