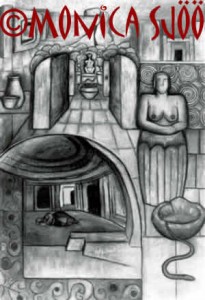 Maltese Goddess of the Upper and Underworld (oil, 1998)

I did this painting after a visit to Malta and Gozo, ancient islands of the Goddess. Her temples there are the oldest freestanding temples in the ancient world and are contemporary with Avebury and New Grange. They are formed in Her corpulent gigantic image. One enters into them as into Her body. The temple on Gozo is called Ggigantija, House of the Giantess, and legends say it was built overnight by a giant woman. Some of the stones weigh fifty tons. On Malta in December, 1997 I was able to finally visit the Hypogeum, subterranean oracular temple. It was awesome to be in there in the Mother’s great womb within the rock and earth. Here is the sleeping priestess within rounded chambers, smeared with red ochre evoking the womb, listening to the voices from the Underworld. Here also is a priestess from the neighbouring temple of Tarxien.