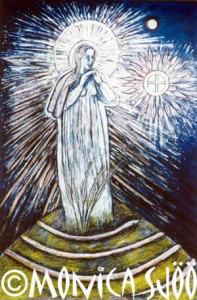 Madonna on the Serpent Mound with the
Sun on her Back (mixed media, 1992)

This is another miraculous experience on Malta, this time with Willow La Monte (editor and producer of the Goddessing Journal) at Cospicua, a city by the sea close to Valletta, the capital. On the 9th December every year the Madonna of the Immaculate Conception is carried through the streets of Cospicua from her great cathedral. She is immensely heavy and made of silver and is carried by many strong men and a few women who are both ecstatic and delirious after many hours. They do ritual steps, swaying back and forth as they carry The Madonna. I cannot describe the feeling of seeing her returning after her long journey. I know that we both cried. She is lit up by the sun on her back. In my image she is at one with the serpent and is not crushing its head under her feet. The first time I saw her carried out of that cathedral some years earlier, there was a violent downpour of rain the moment she was visible in the doorway even though there had been a drought for months. She clearly brought that rain and everyone thanked her.