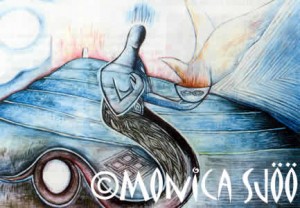 Glastonbury Tor in Southwest England feels like a giant humped Dragon, a vast living animal mother. I try here to envisage the Dragon-serpent Goddess rising. In Her hand She holds a fiery cauldron out of which rises a bird/ phoenix. I didn’t realise when I did the painting that in the “Glastonbury Zodiac”, which is thought to exist in the land around the Tor, the Tor itself is the Phoenix and to others a great swan. I often go to Glastonbury and spend time on the Tor and at Chalice Well and always come away refreshed and very often inspired to do paintings.

The Serpent-Dragon Goddess is Kundalini who dwells within the Earth as well as at the bottom of our spines – a great fiery dormant energy that, when She rises, brings revelations and great energies. The Kundalini may be the dormant energy in the volcanoes and when they erupt She rises. She is the energy of the red hot magma from deep within Earth’s belly. This is how life began and this might be how life ends as the Pacific “Ring of fire” comes alive in unimaginable cataclysms and tidal waves.

Glastonbury Tor, Holy Well or Chalice Well of red healing waters have been and are major inspirations in my life and work. Sacred site of Matrona, the ancient Mother, and the nine Morgens who were shaman priestesses that dwelt on the Tor healing, prophesying, shape-shifting and controlling the weather at a time when the Tor was an island rising out of the surrounding waters and marshland.

Always extreme energies in Glastonbury that are prone to drive people to insanity and megalomania or great creative and spiritual heights. Its magic draws hundreds of women each year to the Goddess conference and the annual “Corn-ference” (about the crop circles) takes place there. Europe’s only legally recognised Goddess temple is naturally to be found in Glastonbury. I have experienced many ecstatic moments on the Tor …. at Beltane, at full and dark moons, on luminous spring and autumn days around the time of the Equinoxes. I remember watching the total solar eclipse from there, surrounded by a great crowd of people all in a hushed awe or in tears as they world darkened and then the solar Mother slowly returned.

The ruined church tower on the Tor looks like a nipple from the distance and close up the vaginal archways appear as gateways to the Faerie realm. To the Celts the Tor was in fact the entrance to the world of the king of the blessed dead or Faerie folk. It is also a 3D labyrinth and in 1980 I took part in torch-lit procession led by Geoffrey Ashe and Kathy Jones, tracing its pathways in the Beltane Taurus full moon. A strange night of wild energies, of storm and lightning, torrential rains and hail! The Chalice Well gardens in contrast is a place of great peace, mediation, waking, dreams, a place full of spirits where images and poems come to me.

Next: Andalucian Madonna and Phoenician Priestess