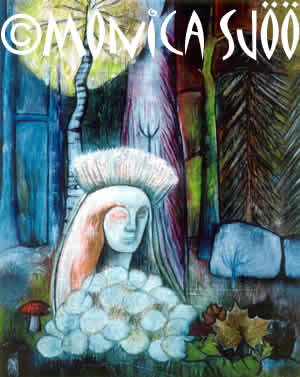 I took part in a five day bilingual (Russian and English) conference outside Moscow on how to protect and rescue the primordial boreal Taiga forest of Siberia and its indigenous peoples from the onslaught of capitalism and multi-national timber companies who can only see timber and dead wood but have no concept of the living and sacred forest. The Taiga is the only vast and ancient forest that has been left more of less intact until now. It was protected during the Soviet era. It is now threatened which is a disaster.

I went to this conference because I grew up with the same vast pine forest in the north of Sweden and I love it passionately. I and my friend Feja Lesniewska also went to visit an eco village and young Russians who live in Karelia, which was annexed by Russia from Finland after the war. I was sitting in the forest drawing by a lake and birch trees, the Silver Maiden, in her golden autumn glory, a landscape so familiar from my childhood. The forest creates soil, water, nutrients, berries, fungi and much else as well as the air we breathe. There is an eternal cycle of life, death and rebirth as leaves fall and decompose and everything is recycled to create new life. The Queen of the Forest or Forestwoman presides over it all. I grew up in Sweden with the sagas of the trolls, mainly forest dwellers that cannot tolerate sunlight and love the dark dampness of the Forest mother. She is called the Huldra and is a magical being who has been slandered by the patriarchs. They see her as a beautiful naked woman with long blond hair who lures lonely men to their deaths in the forest. Her backside is a black putrefying tree trunk. She is both dark and light and, like Kali, she gives and takes life.

Return to the beginning of the exhibition