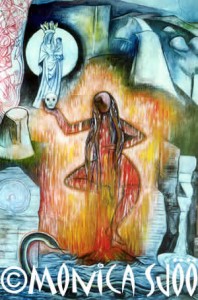 This painting was inspired by visiting Yosemite Park in September, 1998, with Jane Lowe, whom I met at Z. Budapest’s International Goddess Conference. It was also inspired by an experience I had at Glastonbury Goddess Conference in August with the Lammas fire and our ritual around it. I was at the time still undergoing radiotherapy treatment and was in a strange state, feeling as if I were being zapped. I had a waking dream, the night before the Lammas ritual that was part of the conference, which told me I must bare my breasts to the sacred fire of the Goddess to exorcise the radiation. And this I did while warning everyone that the Harvest Mother is not only benevolent, She also takes life, that She had taken my son (my son had died on a Lammas full moon in August), that there is fear but also hope. Something was speaking through me …. perhaps the Dakini Herself as She dances wildly with the elements and gives us wisdom and transformation. In my painting I have brought together fire and water and rocks and mountains. Above is Yosemite park and below the Rocky Valley in Cornwall, with its waterfalls and carved labyrinths in the rock. Beautiful ancient wild lands.

The Dakinis are sky-dancing ancestral pre-Buddhist Goddess spirits of Tibet. They cut through illusions and falsehoods and theirs is a secret language. They hold skullcaps full of blood as they wildly dance. My fire-dancer rises out of a volcano. The molten red hot magma at the centre of the Earth Mother’s womb is like the Kundalini She-serpent that lies coiled and dormant in the spine. She creates and she destroys. If activated she rises through the Chakras to ultimately join Shakti, cosmic female power. She is ecstatic sexual power and therefore feared by the patriarchs.

My dancing Dakini is also inspired by the life-sized carved relief of Maria Magdalena, placed in the centre of a great altar triptych that I saw in a museum of medieval art in Lubeck in Germany. She wears dreadlocks and is covered in fur. She is the wild green woman of the desert. It is now thought that perhaps she in fact was an Ethiopian priestess and therefore African and black.

Cromwell’s Calvinist puritans in Britain destroyed priceless catholic art works, statues of the Madonna and precious old stained glass windows while in Germany, during the Lutheran Reformation, the Protestants had the good sense to preserve medieval art for the future. Thus, the Maria Magdalena, the likes of which I have never seen anywhere else. Calvin was a sort of fascist Taliban of his days and to him anything beautiful or sensuous was an abomination. Earth was a fallen realm and women especially were damned.

Next: Madonna on the Serpent Mound…