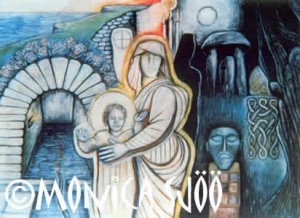 For five years I lived just twelve miles down the road from St. David’s in south-west Wales, the smallest cathedral city in Britain, and to St. Non’s Well. During medieval times there was a very important pilgrimage that went from St. Winifred’s Well in north-east Wales to St. David’sand the Holy Well of St. Non, supposedly St. David’s mother. The legend went that when Nonita was about to give birth, she was for some reason out on the wild coast in a storm and as she sank down and gripped the rocks in birth pains, the well burst forth and she was enveloped in a great light. My interpretation would be however that the reason she was there in the first place is because there was the well, a spring that aided birthing women. Quite likely a priestesshood dwelt there, the Triple Mothers who were midwives, healers, mediums and astrologers.

When travelling in Brittany/Bretagne, another Celtic land, I found it was thought that not only did St. Non travel to Bretagne with St. David as a child and later died there but She is also thought to have been born there. We found the grave of St. Non in a small town called Dirinon in a very old chapel and not far away is St. Non’s Holy Well. When I travelled to France on a pilgrimage with two friends, we started our journey asking St. Non for protection here at her holy well and we were indeed protected.

To me, St. Non’s Well is a most sacred place. I love it and visit it often although I no longer live in Wales. It is situated on the coast, above the cliffs and the blue green sea, so beautiful. There is a catholic retreat and the well is protected as is St. Winifred’s Holy Well, also a catholic shrine. There is a small chapel built with ancient stones found in the area and in it are stained glass windows of St. Non, St. Brigid and St. Winifred as well as a plaster-cast statue of the Virgin with child. I have had many visions in that chapel.

The old pilgrimage-way went past St. Brynach’s church at Nevern and so I included in my painting the Bleeding Yew Mother at Nevern where there is an alleyway of ancient Yews. There is perpetual darkness there even on the brightest day. Pentre Ifan cromlech – the womb of the Cerridwen – above Nevern on the slopes of the Preseli mountains is lit by the full moon.

Next: And the Faeries Danced in the Mist