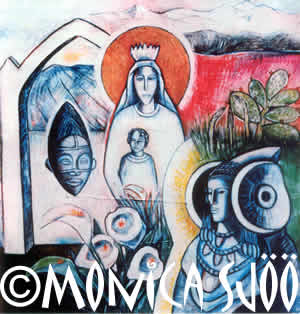 My son and family were staying in the mountains beyond Malaga and beneath a small town called Comares which cradles the summit of a high mountain. It has a strange presence as there is a town of the living that looks like a cubist painting and a town of the dead. Since it is not possible to bury the dead in the earth, they are kept in boxes on enclosed shelves. Rows and rows of the “apartments” of the ancestors painted white, heightened by the sun and bedecked with flowers, photographs and images of the Madonna. A very surreal and also beautiful place. The Madonna in my painting I caught from those graves. With her is La Dama de Elche, a Phoenician priestess of Asht’art or of Tanit of Carthage. The semitic Phoenicians, the same people as the persecuted Canaanites of the Hebrew Bible, had colonies all over the North African coast as well as in the south of Spain. La Dama (and fifteen more Damas have been found) was originally life-size and probably seated on a great throne. On her back is a pouch where the ashes of the dead were kept. Some of the Damas were found in great burial chambers. Tanit is a protector of the dead as well as the living and she says “I am the beginning and the end”. Her mystery religion was profound but was wiped out by the Romans who hated the Carthaginians and carried out many wars against them. Carthage was demolished, raised to the ground and Tanit forgotten, except on Ibiza where her mysteries lived on.

Next: Tanit – Phoenician Goddess of Death and Rebirth