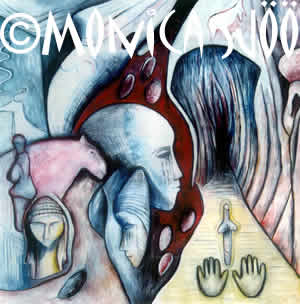 I felt fear for a long time of the Paleolithic caves because I had visited such a cave in the Basque Pyrenees the day before my young son died. I feared we had somehow encountered spirits, had summoned powers we didn’t understand. That night was the full moon. Recently, however, when spending time with my son Toivo and his family in Andalusia in the South of Spain, we visited some Paleolithic caves deep under the earth. One was called “The Hall of the Goddess” and to my amazement I found there a large freestanding rock formation that looked just like an African woman in profile on one side. I started drawing and suddenly realised I was alone in these vast caverns. Drawing, I had become oblivious to where I was. At the instant I realised I was completely alone, my son returned and all was well.

Remains of habitations left by African people dating back to more than a million years ago have been found in the south of Spain. Our earliest ancestors came out of Africa.

I lived with the fear of the ancient caves for the fifteen year since my son’s death in the Basque country in 1985 even though I have always known that the caves are the womb of the Mountain Mother and that they are full of spirits of animals and of humans. Early humans found protection there during the Ice ages in Europe, spirits moan and whisper deep in the subterranean waters of the Underworld seeking rebirth. Everywhere there are uterine forms and crevices coloured red ochre, the colour of the Mother’s menstrual flow.

I finally revisited Iztarits, the cave in the Basque Pyrenees, as I had to confront my fears to be able to live and to move on. There the spirits whispered in my ear that they had nothing to do with my son’s death. I was freed at last.

Next: Ishtar/Inanna, Queen of the Underworld