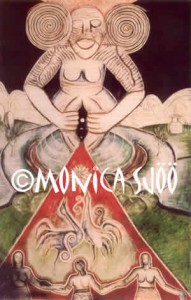 Sheela Na Gig is the Goddess as primordial power. She is portrayed as skull and bleached white bones. She holds wide her vagina from where all the blessings of mother-born life originate. I did this painting in 1978 soon after an initiatory and life-transforming experience of this ancient Mother Goddess at her most powerful and sacred neolithic centre in the northern world, at Silbury Mound, the pregnant womb of the Earth itself. In my painting Her vagina is shown as Silbury Mound, near Avebury stone circle in Wiltshire, southern England. Her powerful and trance inducing presence can be felt there in the very land itself – in its stones and waters. Since that experience, the ancient and sacred sites of the Goddess have become my “teachers”, opening me up to the reality of communications with the ancestors, the spirits both of the land and the dead.

Stone-carved images of the Sheela Na Gig can be found on old churches, monasteries and castles in the Celtic world, especially in Ireland. Such images of the Goddess are also found in Indian Tantric art, over the doorways to sacred spaces in many parts of the tribal Shamanic world. The doorway represented Her vulva, and the sacred space Her womb, and people would enter between Her legs, touching Her vulva as they did so for protection and blessing. Such stone-carved images also stood by holy wells where people crawled between Her legs to drink of the waters. The well was in the old times seen as a vagina of the Earth Mother, and the waters as the menstrual flow from Her underground womb and blood arteries.

Pagan masons smuggled the image of the Goddess into the early churches for protection and luck. The very early Celtic Church was still enriched with Pagan and Druidic practices. To the later Catholic hierarchy – that tolerated no opposition to their own straight and narrow patriarchal stance and for three hundred years persecuted so-called heretics and witches (women and men of the Wise craft) throughout Europe for practising their ancient Goddess-given healing skills and for believing that the Earth is our living mother – the Sheela Na Gig was a monstrosity. She is indeed a powerful image of autonomous womanhood, with an active and dynamic sexuality – the very sexuality that the Church had declared taboo and out of bounds. Instead, it upheld the image of the non-sexual Virgin Mary, a passive vessel awaiting the command of a Fathergod, now seen as the real creator of life, who gives birth to their “saviour” without ever having experienced sexual pleasure. To the Goddess, however, all forms of non-harmful sexuality are sacred. Ecstatic sexual practices are integral to Her rites. A number of images of the Sheela Na Gig were hidden away over many years from public display in the basement of the National Museum in Dublin.

Next: Corn Mother at Newgrange