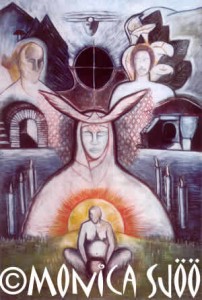 There was a period of several years when I did not do any painting as I grieved for my young son and tried to help my oldest son through terrible treatments for his cancer. This is one of the first paintings that I did after his death. I wanted to honour my dark son and my light son. I wanted them to be protected within the realm of Spiderwoman, who dwells in the centre. She wears the bird-feather headdress that I wore when we buried my young son’s ashes in the Medicine Wheel in the Welsh tipi village. I had become the Shaman woman presiding over my own son’s funeral. Unbearable. And at the same time the woman in the Sun is my “Daughter in Love” pregnant with and expecting my grandson/her son in Portugal. Death and life, endings and new beginnings.

This is a celebration of my dark mixed race son, Leify, and my light son, Sean, who died from Non-Hodgkins Lymphoma at the age of twenty-eight in 1987. Both died on a full moon in the summer August and July. Sean was proud of his northern heritage, a talented artist himself. He drew and painted the mushrooms and fungi of the forests. The Scandinavian pine forests are full of edible and beautiful “mushrooms” (svamp in Swedish) and many kinds of berries. I associated my young son with lush southern flowers. My sons are protected by Spiderwomen. We are all attached to Her fine web as She, the great Hopi creator Goddess, spins our lives and destinies just like the Norns do in the northern world. My young son’s ashes were sewn into a little African drum that he had been playing before he died and we buried the drum in the Medicine Wheel of the tipi village, women digging the hole with their bare hands. I had seen the white-winged, feathered headdress hanging on a tipi pole where we all slept in the Big Lodge overnight before the “funeral”. I put it on my head in the morning and became the shamanka, she who traditionally midwifed both birth and death.

Next: Lament for my Young Son