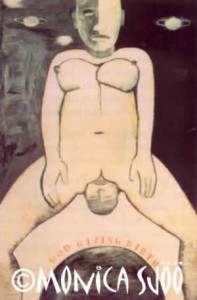 The mysteries of life, birth and death

violence, love and beauty
Out of body – Tearing Blood     Pain
Comes tenderness in a whisper-said love
For created being

The painting was based on the natural home birth of my second son, Toivo in 1961, a birth that I experienced as a first initiation to the Great Mother who is both imminent and transcendent, both dark and light.

For the first time I experienced the enormous power of my woman’s body, both painful and cosmic and I “saw” in my mind’s eye great luminous masses of blackness and masses of radiant light coming and going. The Goddess of the Universe in her pure energy body. This birth changed my life and set me questioning the patriarchal culture we live in and its religions that deny the life-creating powers of the mothers and of the Greater Mother.

In ancient matrifocal cultures during the Neolithic, women gave birth in the sacred precincts of the Great Goddess where they were attended by shaman priestesses who were midwives, herbal healers and astrologers.

Birth was a sacrament and Vicki Noble once wrote that the original shaman is the birthing woman as she flies between the worlds bringing the spirits of the ancestors back into this realm, risking their own lives whilst doing so. We are spirit embodied.

I had given birth to my first son in a hospital in Stockholm and it had been a disaster for both of us. This home-birth, without medical and technical interventions, opened me up to the powers of the Great Mother.

In all patriarchies, women are de-sacralised and diminished and medicine and religion have been taken over by men who envy women’s creative sexual powers.

I wanted to create a painting that would express my emerging religious belief in the Great Mother as the Matrix of cosmic creation. I didn’t want Her to be a white woman. As a result of this work I was nearly taken to Court and my painting was censured many times during the 70s and 80s It was considered “ugly”, “obscene” and “blasphemous”. A modem day witch-hunt was carried out against me and my work. It was racist also. I didn’t know at the time I did the painting that the entire human race is thought to have originated from one or a handful of African women in the mists of time. This has been traced through the mitochondrial DNA which is only carried through the mothers/women. In 1968 there was also no women’s arts movement or a Goddess movement and I felt totally alone. I had a sense though that ancient women, who coincide with us in another time-space, were communicating with and through me. I was their medium and gateway into this world.

There are black stones or meteorites associated with Goddess sculptures worldwide such as Diana/Artemis at Ephesus. She is a Starmaiden and many legends tell of how the divine woman, such as Asht’art of the Phoenecians at Byblos in the Near East fell into a sacred lake from the sky as a flaming, whirling ball of light and fire. The “dark holes” in space might be entrances or gateways, the birth channel, to other universes. She is both the divine light and she is radiant and pulsating black light. She is infinite space. She is the She-serpent, Kundalini of invisible fire. I “saw” the radiant black light as my son was born and it changed my life forever.

Without the sense of being one in a long line of women active and surviving through the millennia, I would probably have gone out of my mind with anger and loneliness as well as grief at what we women of today have lost.

I spent two years in Sweden, 1965-67, working with the Vietnam movement, which brought me into working relationships with radical leftwing artists and black awareness artists, one of whom became the father of my young son born in 1970. 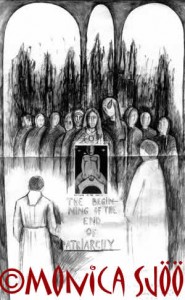 “God Giving Birth” was persecuted during the Arts Council sponsored arts festival in St. Ives in 1970 and then in London at Swiss Cottage library. In 1973 we had a pioneering collective women’s art show that we called “5 women artists – Images of Womanpower”. This was when I nearly ended up in Court on the charge of “obscenity and blasphemy”. It was fundamentalist Christians who instigated this. Many years later I had the satisfaction of carrying a black and white poster of my painting into Bristol cathedral as part of a women’s action. The year was 1993 and we were holding a national women’s conference in Bristol organised around opposing racism and to Break the Tabus/Breaking the silence and the chains that bind us. We were Ama Mawu, the Bristol women’s spirituality and Politics group. We had set the date for the end of Patriarchy and were intent on celebrating it on Silbury mound, Earth’s pregnant belly, in the Lammas August full moon. We believed in making our dreams become realities.

In fact I had for thirty years harboured a waking dream that I wished to walk into a cathedral or church during mass to tell the priest or bishop that he and the church blasphemes against the Mother and to remind the congregation of the three hundred years of witch-hunts that took place in Europe not so long ago. Neither the Catholic nor the Protestant churches have ever apologised in public for their genocide of women, the wise women of old. Well… now years later there was a group of fifteen or so women from this conference who were unafraid and courageous and wanted to do the action with me. We walked into Bristol Cathedral during mass on Sunday and lined up in front of the high altar. After a debate between me and the Dean of Bristol, we insisted on singing all the verses of “Burning Times” to the congregation. It was extraordinary and cathartic and real and scary we broke a major taboo by what we did and we refused to remain silent. If I hadn’t done God Giving Birth, this action would not have happened.

The painting was bought in 1994 by the Women’s Arts Museum (Museum Anna Nordlander) in Skelleftea in the north of Sweden where it is an important part of their collection of women’s art.

« Extras
Women’s Mysteries »
We use cookies on our website to give you the most relevant experience by remembering your preferences and repeat visits. By clicking “Accept All”, you consent to the use of ALL the cookies. However, you may visit "Cookie Settings" to provide a controlled consent.
Cookie SettingsAccept All
Manage consent