« Shamangoddess at Callanish Stones
My Sons in the Spirit World » 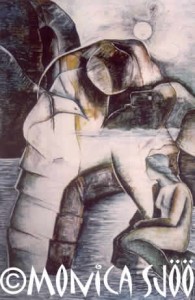 It was the Spring equinox 1985 – the year my son died later in the summer, in August. Jill Smith, who lived with us for a while in Wales before moving to Lewis, and I were walking the coastal path not far from St. David’s. It was a very windy day and we had to hang on not to get blown off the path and down the steep cliffs into the stormy sea below. Jill was carrying her baby son, Taliesin, on her back and it was all quite dangerous. Taliesin had been born in the tipi village and when he was six days old Jill and I “baptised” him in St. Non’s well’s holy and healing waters. Suddenly, as we walked along, I saw an incredible rock in the sea that looks just like a great hunched troll woman, a great power emanating from her/it. Behind her was a great cave and the waters swirled between her legs. I just had to sit down and draw. I was sitting on the edge of a cliff, perilously close to falling and hanging on to my paper, pens and pencils almost with my teeth. As I was working on the painting, which is six feet tall, back in the cottage, I received a card sent from Copenhagen in Denmark. On the card was the picture of a beautiful little mermaid sculpture. She sits out by the sea on a rock in Copenhagen and mourns forever her lost love and the life she gave up for an unfaithful prince. She went into my painting. “The Little Mermaid” is a cruel but beautiful fairytale written by HC Andersen and brings up memories from my childhood in
Sweden.

As the painting progressed, the rock began to embody Earth Herself and I call Her Gaia.

The Precambrian rock, along the Pembrokeshire coast, is in fact one of the most ancient on earth.

Next: My Sons in the Spirit World

« Shamangoddess at Callanish Stones
My Sons in the Spirit World »