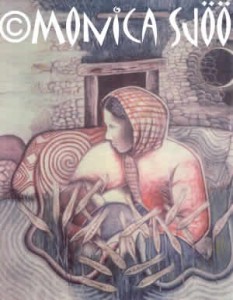 New Grange is a womb/tomb/temple of the Goddess, like West Kennet Long Barrow. It is situated in the Boyne river valley, named, as are most rivers, after a Goddess, in County Neath, north of Dublin, not far from Tara, the ancient centre of Ireland. It is contemporary with Silbury and with the magical and extremely powerful temples of the Goddess on Malta and Gozo, near the African coast, around 3000 BCE.

I visited New Grange for the first time in 1979 and had a sense of home-coming. It was the same feeling of recognition, of great joy, grief and awe, as I had at Silbury, Avebury and West Kennet Long Barrow and the Maltese temples. As an artist and a woman, I felt a sense of familiarity with the forms and symbols. They spoke directly to something deep in my awakening memories. They gave me a sense of joy at the beauty and the incredible love those people had for the Earth as they created their “cathedrals” of earth and stones in thanksgiving for the powers of life, consciousness and spirit that She had given them, and for taking them back into Her womb at death.

The mound has been reconstructed and excavated. It is covered in white quartz stones which give it the appearance of a gleaming egg and it is surrounded by a stone circle. The entrance into the internal womb chambers is via a twenty-foot stone passage. The passage walls appear to have a heartbeat and give the impression of being intestinal, fleshy, living and breathing. In front of the entrance to the passageway are enormous stones carved with multiple spirals and other symbols of the Goddess. Above the entrance there is a slit opening. On the dawn of the winter solstice each year a ray of the dying Sun enters here and travels the whole passage to touch a triple-carved spiral in the innermost chamber within the dark womb. Here the whole of the farming population could witness the death and the rebirth of the Sun from the womb of the Mother. This would also have been a time of Shamanic journeys to bring back powers of healing and of prophecy from the ancestors. This was of course long before patriarchal times when the Sun came to be seen as a conquering hero god who slays his own Mother and who neither dies nor is born. At the time of New Grange and of Silbury and the Maltese temples, there were no kings or male chieftains to impose their cruel and arbitrary edicts on the people. The cultures were led by collectives of women who believed in power with, not power over. In Scandinavia the sun was always female, a benevolent life-giving Mother.

Every ninth year the lunar beam travels the same path as the Sun into the womb at New Grange. In the old times the spiral, along with the labyrinth and the movements of the serpent, were seen to symbolise the life-giving and transformative powers of the Cosmic Mother. Spirit spiraling into matter and back again ….. matter and spirit being one and the same ….. all vibrant and dancing energies. Spirals are to be found everywhere from nebulas to water formations and in the very skin of our fingers.

In my painting I have envisaged the Corn or Harvest Mother as a peasant woman suckling her child. The sun and the moon are behind her on the walls of the mound.

Next: Shamangoddess at Callanish Stones